This spinel is engraved with the name of the Mughal Emperor Jahangir (r. 1605–27). Following the demise of the Mughal empire, the symbols of imperial status were appropriated by the rulers of the Successor States, who regarded them as relics of imperial power; this stone was later inscribed for Kurshid Jahangir (1838–1902), grandson of the third Nizam of Hyderabad. 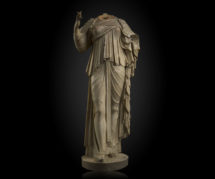