This is one of an extraordinary set of twelve silver-gilt standing dishes collectively known as the Aldobrandini Tazze. Made in the late 16th century, they represent the first twelve Caesars of imperial Rome, a popular subject during the Renaissance, particularly following the publication of the set of biographies originally written in AD 121 by Suetonius, private secretary to the Emperor Hadrian.

Described as one of the most spectacular groups of 16th-century silver to survive, they were owned by Cardinal Pietro Aldobrandini (1571–1621), one of the greatest collectors of his time and nephew of Pope Clement VIII. The set was dispersed in the 19th century; this example was exhibited at Burlington House in 1901 by which time it belonged to J. Pierpoint Morgan.

An ambitious exhibition recently reunited the Aldobrandini Tazze for the first time since the mid-nineteenth century. The Silver Caesars: A Renaissance Mystery was held at The Metropolitan Museum of Art in New York from December 2017 to March 2018 before travelling to Waddesdon Manor from April to July 2018. 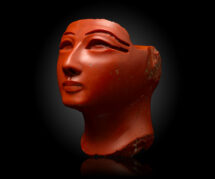 Head of a Royal Figure

The Wine Cup of Emperor Jahangir 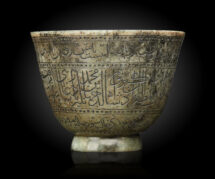