This necklace is a tour de force of 20th-century jewellery, representing a high point in the stylistic encounter between Cartier and princely India. It was designed for Maharaja Digvijaysinhji of Nawanagar in 1937 using an exceptional group of oval and cushion-cut Burmese rubies collected by his predecessor, Maharaja Ranjitsinhji, a renowned connoisseur of gems and a friend of Jacques Cartier. Following Indian Independence, the necklace was returned to Cartier for resale. The original design, meant for an Indian prince, was altered to suit a woman’s physique, the line of single rubies to the rear having been substantially reduced. This ruby necklace was worn in its modified shape by Mrs Loel Guinness at Truman Capote’s Black and White Ball in 1966. 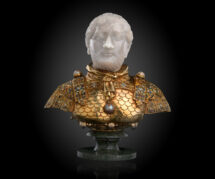 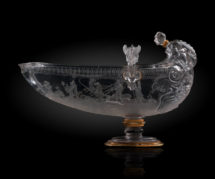