This medieval chalcedony head of the Emperor Hadrian, with curling hair and groomed beard, is most probably from the court workshop of Frederick II Hohenstaufen, who was crowned Holy Roman Emperor in 1220 and saw himself as a direct successor to the Roman emperors of antiquity. His reverence for the classical past and his avid patronage of the arts led to the creation of works like this bust. It was remounted on a silver-gilt bust in the late 16th century when the art of lapidary was reaching exceptional heights, notably in the workshops of the Miseroni family in Milan. 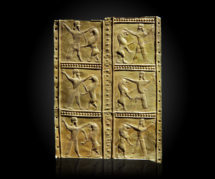 Gold Plaque Representing a Hero and Lion in Combat 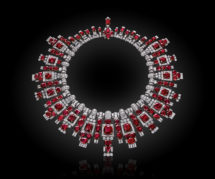