This ornate and intricate Greek clasp from circa 300 BC takes the form of a Herakles knot. Measuring approximately 4 cm in length, the two interlocking gold loops are edged with plain and beaded wire and the four ends are capped by roaring lions’ heads. In the centre of the knot is a figure of Eros, the god of love, who flies off to the left, his arms raised as he plays the double pipes. The Herakles knot was often thought to have magical or protective qualities. It was given its name by the ancient Greeks; Herakles is said to have used the knot to tie the skin of the Nemean lion around his neck having slain it as the first of his 12 labours. It was popular with both the ancient Greeks and Romans as a protective amulet, most notably as a wedding symbol, and was also used in medicine: Pliny the Elder wrote that wounds bound this way would heal faster, and it continues to be used to this day. 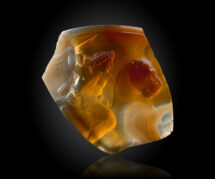 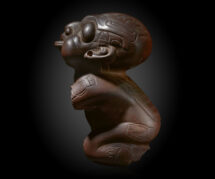