This large silver and gold dish depicts Sasanian emperor Shapur II on horseback, hunting ibexes. Dating from 300 to 500 AD, the dish has a remarkable weight of 1.011 kg and measures 25.4 cm in diameter. One of the greatest Persian dynasties, the Sasanian Empire lasted from the 3rd to the 7th century AD and stretched at its peak from Anatolia to the Indus Valley. Their rulers assumed the title ‘shahanshah’, or 'king of kings’, and the monarchy asserted power by divine right. The Sasanians became renowned for their gold work and silver vessels which were often exported and exchanged as diplomatic gifts, making known outside the empire the splendour of the Sasanian sovereign, and his society’s taste for magnificence and luxury. 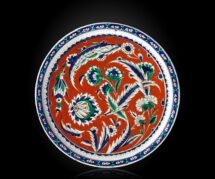