This rare and compelling sculpture represents a plump bear seated on its haunches in a moment of repose as it scratches a spot immediately behind its right ear with its right forepaw. At peace with itself, and with the world, the bear is wholly lacking in the ferocity that typifies most Han-dynasty representations of bears, tigers and other wild beasts.

The bear has been a popular totemic emblem in China since ancient times. China’s foundational myths hold that the legendary Yellow Emperor, or Huang Di, tamed six different types of ferocious beasts, including a bear, with which the Yellow Emperor has been linked ever since. From at least as early as the Han Dynasty, bears have been linked with military prowess, shamanism, immortality and virility. 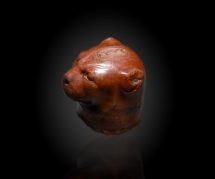 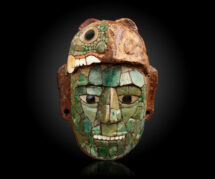